Over the past 10 years on SI and nationally, opioids (starting with prescription narcotics and moving into heroin) have become a growing concern. A large infusion of attention and consequently funding has come into the local community from the federal, state, city and local level to combat opioids. However, there are critiques of the current energy around opioids given that the heroin epidemic of the 70’s and 80’s, which primarily impacted black and low income communities, received little attention and almost no funding or compassion. Additionally, there is misinformation around the types of people that opioid use is impacting on Staten Island with the majority of focus on white, middle class, suburban residents despite rates of use and overdose among Black and Brown people and North Shore neighborhoods.

On Wednesday, October 28th, at 6:00 PM, join TYSA as they officially launch a virtual “In Our Backyard” Campaign to bring awareness to the use of opioid and other drugs and its impacts on Staten Island communities of color. This Facebook Live event will feature guest speakers from CHASI, Project Hospitality, PAIGE ONE ASSIST, and the Richmond County District Attorney’s Office who will provide a history on delivering culturally relevant behavioral health services. The event will also feature a PSA created by TYSA youth consultants, and an opportunity for Q&A. This will kick-off a series of strategies that will increase awareness and build capacity of partners. Any person interested in attending must register here: [https://www.eventbrite.com/e/in-our-backyard-campaign-launch-tickets-125528409853]

For more information contact Abigail Batista at abigail@sipcw.org or 718-226-0257.

Guest speakers will include:

Raymond Jordan is a Peer Specialist who has worked for Project Hospitality for almost 2 years. He works in the Staten Island community to help with the opioid crisis and drug epidemic that has taken the lives of those that were really close to him. This work is very personal to him, as someone who has lived with the disease of addiction and who recently celebrated 3 years clean and away from drugs.

Lee Garr has worked in human services as an administrator, advocate, case manager and classroom instructor in the New York City area with individuals, adults, children and families for over 20 years. Currently, Lee serves as the Vice President of Community-Based Programs at Community Health Action of Staten Island. Previously, Lee served as Director of Programs at Amida Care, Assistant Director of Health Homes at CAMBA and was an adjunct professor at LaGuardia Community College. Lee holds a MA degree in Counseling from Manhattan College and is completing his full CASAC certification.

Debbie-Ann Paige is a public historian specializing in local African American history and a professional genealogist. She is the founder of PAIGE ONE ASSIST, a client-centered legacy research company focused on prompt, professional commitment to service. She is a newly appointed member of the New York City Council task force created to examine monuments, statues, public art and historical markers on city-owned property. She is also a senior policy analyst with the Council of State Governments working with state policymakers and key stakeholders on issues relevant to veterans, communities of color and the U.S. territories of Puerto Rico and the U.S. Virgin Islands.

Upon taking office in 2016, District Attorney Michael McMahon made it a priority to transform the Richmond County DA’s Office (RCDA) into a modern prosecutor’s office focused on precision prosecution, problem-solving crime prevention, and bridge building between law enforcement and the communities it protects. McMahon has utilized his broad and deep experience in law and public service to implement and pursue the issues he promised Staten Islanders to address. He has successfully attacked the Island’s criminal justice issues: From the opioid epidemic to traditional street crime and gun violence, and from domestic violence to economic crime. McMahon continues to work with partners in law enforcement, especially our police officers and detectives, to drive down crime numbers and keep Staten Islanders safe. 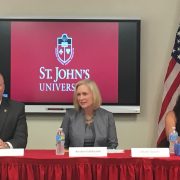